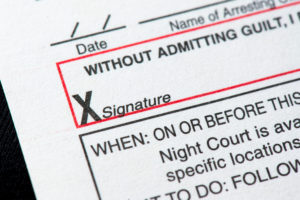 Charged with a Criminal Misdemeanor But Only Given a Ticket…Now What?

In Indiana, there are certain misdemeanor offenses that do not require an arrest, but allow for the issuance of a criminal misdemeanor summons. What is the difference between an arrest and a summons, and why does it matter?

An arrest is more serious and occurs when an officer interrupts the freedom of the accused, restricting their liberty of movement, Johnson v. State, 708 N.E.2d 912, 914 (Ind. App. 1999). A summons, although restricting liberty in some capacity, instead requires the person accused to appear in court at a certain time, eliminating the need for arrest. If that person does not show up for their hearing on the specified date, a warrant will be issued for their arrest immediately. Issuing a summons instead of an arrest can lower jail occupancy while also making the officer’s time more efficient.

A criminal misdemeanor summons can be beneficial for the accused because it avoids a trip to jail and generally does not require the posting of bail. Since the accused is not in jail they are able to continue working and reduce hardship their family. Indiana Code 35-33-4-1 allows the court or the law enforcement officer to use discretion whether to arrest or issue the accused a summons and some jurisdictions allow summons in place of arrest whenever possible.

An officer may choose to issue a criminal misdemeanor summons instead of an arrest because it is inconvenient to take that person to jail and process them. However, an officer may choose to arrest instead of issuing a summons because post-arrest searches are constitutionally permissible.  A Prosecutor may also request that a summons be issued if there is probable cause to believe that a misdemeanor offense has been committed. In almost all circumstances, a summons instead of an arrest is beneficial to the accused person.

Where those unfamiliar with the law fall into trouble is when they receive a summons for a misdemeanor and assume it is just a ticket, missing their court date. A summons will contain the nature of the offense, and direct the person receiving to appear before the court at a certain time and place. If you make a mistake and think your summons is simply an infraction, like a traffic ticket, you could be arrested for failing to appear in court.

While all of the offenses listed in the statute allow the officer to effectuate an arrest, the statute does not require arrest (except in certain circumstances, such as OVWI). As such, it is often at the officer’s discretion whether to arrest or issue a criminal summons. Very often, if a person does not have a criminal history or is accused of committing a minor offense, such as misdemeanor theft, underage drinking, or possession of marijuana, the officer will be more likely to issue a summons instead of arresting the person.

If you are stopped by an officer and given a criminal misdemeanor summons, it is important not to ignore the summons. A summons is a criminal charge and if ignored, can lead to a warrant being issued and the person being required to post bond. The court date on the summons is generally the Initial Hearing Date. This is the first court appearance where the accused will be given copies of the police report and criminal charges. If you hire an attorney prior to the initial hearing date, the lawyer may be able to waive this first hearing. However, whether you hire an attorney or request a public defender, it is important to treat a criminal summons seriously so as to not trigger any additional consequences.

Julie Chambers established Chambers Law Office in 2012 after service as a deputy prosecutor for nearly five years. She brings this unique experience to all of her cases. If you or a family member has been issues a criminal summons, contact Chambers Law Office today to discuss your case at 317-450-2971.